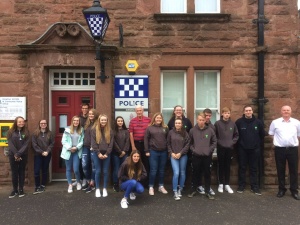 On both 1st and 15th June 2017, Arbroath’s Police Scotland Youth Volunteers visited the Tayside Police Museum in Kirriemuir as part of their continuing commitment to understanding Policing in their local area.

During their visit, PSYV Arbroath were guided through the decades by retired officers Hamish Gray and George Morgan who between them have over 60 years of Policing experience in the local area.

The Youth Volunteers had a great time learning about the history of Policing in their area and were surprised to find that the origins of Policing in their own town of Arbroath were first established as far back as 1836. Delving further back in time, they also found out that Policing in Perth can be traced back to 1811, 18 years before Sir Robert Peel established the ‘Bow Street Runners’ in London.

Many of the artefacts caught the attention of the Youth Volunteers, particularly the birching bench which was used during the whipping of young male offenders in days gone by!!

The team also got to meet two permanent residents of the museum, namely Oor Wullie and PC Murdoch who didn’t appear too impressed with Youth Volunteer Sam’s new uniform.

A huge ‘Thank You’ to Hamish and George for taking the time to speak to PSYV Arbroath about the museum and its heritage.